Awards just like the Tour de France, but with bras!

The Boob Ride is a fun event and so are the awards. There is a family friendly post ride event in Solana Beach and all the riders get to vote for who wins the Bra Awards. These are perpetual trophies with the winners' names adorned on the plaque. We do not record times, so we just pass out awards for the fun of it! Riders are encouraged to campaign for themselves for an award throughout the ride.

We do deviate from the Tour de France trophies a bit to award the Most Supportive Bra to the cycling group that turns out the most riders. This is a DD bra with a back brace, just to hold these babies up. 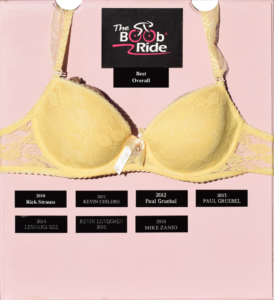 The Yellow Bra is one of two awards that can kind of be won by being a strong rider. Theoretically, this award is given to the first rider in overall (male or female). Reality is we do not have an official finish line, there are not any timing chips, and there is not a sprint finish. We talk to the lead pack and ask them who the strongest rider was. Surprisingly enough, the riders usually come to a consensus about who the strongest rider was.

In case you missed the parody of this award as it makes fun of the Tour de France Yellow Jersey, here are the details.

Be The Yellow Sponsor

The Maglia Rosa bra is exclusively for the first female to finish on the long route, sorry guys.  Like the Yellow Bra, there is not a finish line or timing chips or any of that serious racing stuff. We ask all the riders who was the first woman overall and they let us know.

The Maglia Rosa award was created by Paul Self's wife Eriko. She felt there was no way for a woman win the Yellow Bra, so she found this bra and helped create the really cool award.

Maglia Rosa is Italian for pink fabric and is the color of the leader's jersey in the Giro d'Italia. More details here.

Be the Pink Sponsor 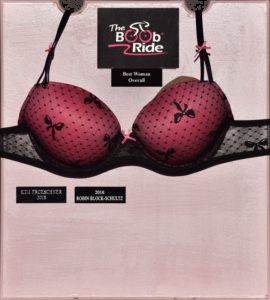 The Green Bra is a parody of the Green jersey in the Tour de France for the best sprinter. In recent years, Peter Sagan is famous for winning this jersey.

However, we do not have sprinting locations or points. That would require WAY to much coordination and make The Boob Ride a "serious race". We have no desire to be a serious race. Our award is determined by voting at the Last Mile Party, which has seen a few adult beverages being consumed. The fun and comradery after a great ride tends to designate an "interesting" winner.

The original winner of the Green Bra was Bob Binder. Many of the OC riders know Bob. He is also seen at the party every year as the photographer (his day job is a professional sports photographer). Bob is really a climber, not a sprinter. Some would say he couldn't sprint his way out of a wet paper bag, but we are certain that he could!

Be the Green Sponsor

The King of the Mountain Bra

In a "real" bike race, the King of the Mountain (KOM) is awarded to the best climber in the mountain stages. The race would designate points for the first few riders to reach the mountain tops during the race. The rider with the most points when the race is finished is the winner. The Tour de France is famous for their red polka dot jersey for the KOM winner, so we have a little fun with the award.

Our KOM is determined by the riders voting on who they think is the strongest rider. Meanwhile, Paul Self is cruising the crowd and talking to people about how the ride went. Sometimes the rider with the most votes wins, but Paul has been known to make his own decision. One year the winner (who will go nameless) was definitely not a climber and would struggle just to get over a freeway overpass. However, this person gave more effort and battled over every climb. Their perseverance and effort was told by many riders that day. The story was so strong, that Paul decided to award them the KOM.

Our KOM bra award was graciously provided by our long time supporter, Dickie Dahlerus. Dickie has won the KOM many years and is a strong rider. Our original bra was hand panted with pink polka dots,  not true to the Tour de France's jersey. So, Dickie had a seamstress friend of his custom make a bra for us. He found the right red polka dot fabric and sewed it onto a D-Cup bra. Now we have the right trophy!

Be the Polka Dot Sponsor 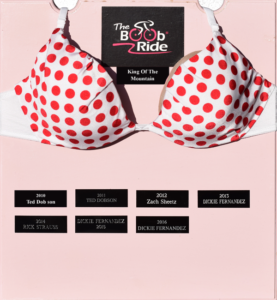 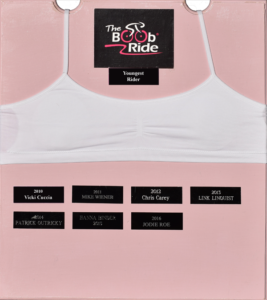 The White Bra is for the best young rider during the event. This is a a white training bra to parody the Best Young Rider award at the Tour de France. In the Tour, this award is given to the fastest rider under 25 years old.

The Boob Ride wants all the riders to help selecting the Best Young Rider for this very prestigious award. Like our other not so serious awards, we tally votes and talk to riders at the Last Mile Party. We place no decision criteria for this award, just let the crowd have its way.

Be the White Sponsor

The Red Bra is theoretically awarded to the most aggressive rider during the event. We STRONGLY discourage aggressive riding because this is a fun event. No need to be so serious!

We do follow the Tour de France's protocol on this award. They have a jury that votes on who the most combative/aggressive rider was during a stage and then overall. The daily winners will have a red bib number for the next day's race. The Tour does seriously analyze the combativeness, breakaways, sprints, etc. to determine this award.

We let the crowd vote and then the jury (Paul) picks the Most Aggressive winner.

Be the Red Sponsor 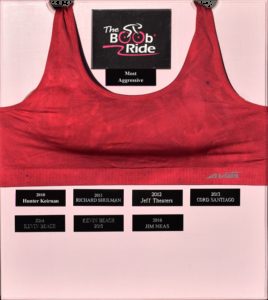 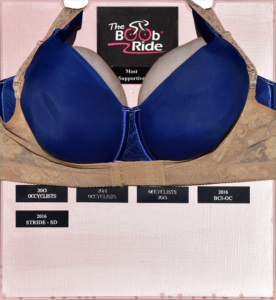 The Most Supportive Bra

The Most Supportive Bra is a DDD monster of a bra with a back brace. We made this one up as a team trophy for the group that turns out the most riders for the event. We determine the winner by adding up how many riders showed up under a single team’s name. Make sure to register for the event under your team's name. If your team's name is not listed in registration, let us know and we will add it.

Be the Blue Sponsor

The Most Inspirational Bra

The Diamond Bra is an award we created in memory of Kevin Childre. He was instrumental in encouraging the Navy San Diego team to support our efforts. Here is a background story on Kevin and the thoughts/emotions behind this unique award.

This is an award that the Fun 4 Good Board votes on. We only have one criteria - who has inspired us with the passion for battling breast cancer? We have awarded this prize to groups and individuals in the past. Please let us know how has inspired you and they will be a candidate for the Diamond Bra award.

Be the Diamond Sponsor 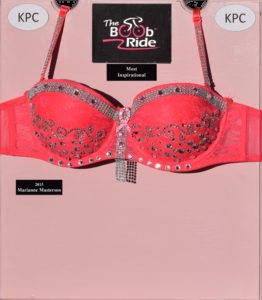